The City of Ryde is a local government area that services certain suburbs located within the Northern Sydney region, in the state of New South Wales, Australia. It was first established as the Municipal District of Ryde in 1870, became a municipality in 1906 and was proclaimed as the City of Ryde in 1992.

The local government area extends from the Parramatta River to the Lane Cove River which encircles the area in the north, and is bounded in the east by the peninsula of Hunters Hill and the City of Parramatta in the west.

As part of the City of Ryde’s overall vision of adopting a ‘smart cities’ strategy for the Ryde Town Centre, the City’s lighting needed to be upgraded from high wattage metal halide lighting to energy efficient, long life LED lighting.

City of Ryde has been a pioneer in Smart Lighting solutions. Way back in 2014, when the Smart city and lighting controls were still in an infancy, the City of Ryde took a bold step to put in lighting controls for all the Council owned poles  that were being built in all the new suburbs in Ryde.

The LED lighting needed to meet the required standards for pedestrian lighting, highways and major arterial roads, and energy efficiency gains of at least 40% over the existing lighting. Pivotal to the project was the provision of a smart controls system. This feature would provide the Council with the ability to control the lighting remotely and allow for dimming, scheduling, fault and network infrastructure monitoring. The City also wanted a solution that would provide the bandwidth, reliability, and partner ecosystem to allow them to expand into other smart city applications. It was also important that the solution be based on open standards, allowing the City to have their choice of vendors.

Installation on Ryde Road, one of Sydney’s busiest main roads, was the most challenging aspect of this instalment. A major arterial road surrounding the busy Top Ryde Shopping complex and transport hub, restricted change-over to low shopper and commuter traffic hours. 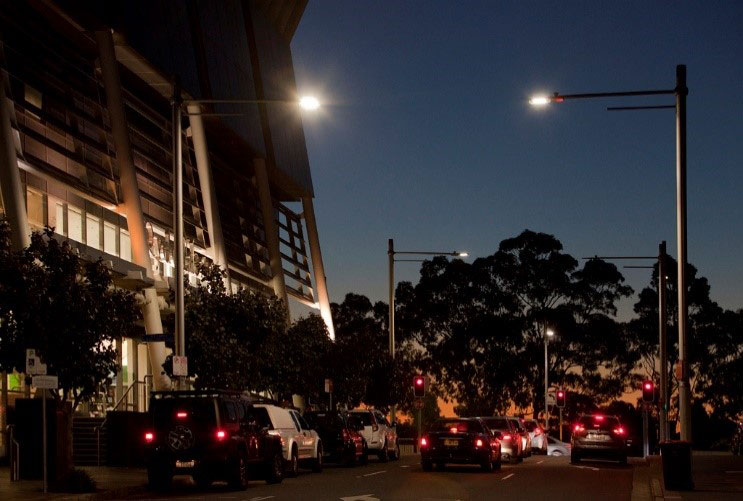 SCS has worked with Itron to deliver a Smart Control system to the City of Ryde. SCS started off connecting 68 lights which has now grown to over 500 lights and still counting.

The Nodes (Light Point Controllers) have a radio built in them which communicate with the user interface via a cloud interface.

SCS and Itron have now done an RF design which incorporates the entire Ryde geo-zone, which will enable the Council to put up lights in different areas and be connected to the system. This will also enable the Council to start adding more Smart city initiatives to its program and connect through the network that is being built.

The lights can be remotely managed through real time control, alerting the status of the light, and scheduling management to allow for advanced dimming schemes. Additional sensors, such as traffic cameras or environmental sensors, can be connected, allowing the City to tie various sources of data together when making decisions. To further future-proof the installation, each luminaire is controlled remotely, via a leading edge wireless access point, that is able to service 5000 luminaries within a ten-kilometre radius, thus enabling capabilities to service several of the town centres for later stages.

The contemporary design of the luminaire, its highly efficient performance and functionality ensured that the luminaire met all the urban design, energy efficiency and asset management criteria of the Council.

The adoption of the outdoor lighting control system is one of the first in NSW, which delivers a world class Smart City technology platform. Additional features can be added in the future such as; motion, light and rain sensors, with the potential to also trigger external devices such as VMS and emergency response alarms. This was also one of the first installations in public lighting to claim the NSW Energy Saving certificates.

Exceeding the council requirements, SCS was able to achieve more than a 50% reduction in energy converting the conventional metal halide luminaires to networked LEDs. As part of its plan to modernise the city’s infrastructure, the council are scheduled to convert 50 lights per annum to LED.

“The outdoor lighting control system is imperative to our Council’s vision of creating a liveable, smart city environment. We envisage City of Ryde as being an early adopter in this space and we’ve invested in and implemented the new lighting to allow our council to take advantage of the latest technologies to achieve efficiency and cost savings.”